Resembling a wheel with six spokes, “trapiche” emeralds may be the most unique variety of May’s birthstone. Found primarily in the black shales of Colombia’s western “emerald zone,” these gemological curiosities display alternating rays of vivid emerald green and deep black. 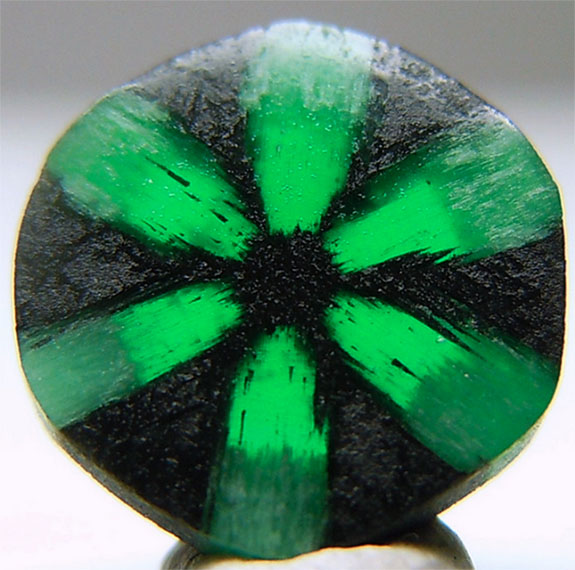 Trapiche emeralds were first described by Émile Bertrand in 1879 in a meeting at the Société Géologique de France, but even after more than 140 years of examination, gemologists have yet to reach a consensus regarding the mechanism by which the pattern forms, or the conditions required for it. In one interpretation, the black impurities are remains of the shale matrix in which the emeralds formed.

The name “trapiche” comes from the Spanish word for the cogwheels used in sugar mills. Apparently, the pattern of the gem looks very much like the cane-crushing gears used by farmers.

The distinctive six-spoked “trapiche” effect also has been seen in other minerals, such as ruby, sapphire, garnet, chiastolite and tourmaline.

Emerald is the most valuable variety of the beryl family. Non-trapiche emeralds famously display more subtle visible inclusions, which are referred to as “jardin” (French for “garden”). These imperfections do not detract from the stone’s beauty but, instead, give each stone a unique fingerprint and distinct character.

The name “emerald” comes indirectly from the ancient Greek word for green gem, “smaragdos.” Besides being the birthstone for the month of May, it’s also the preferred gemstone to honor 20th and 35th wedding anniversaries.

The extraordinarily rare trapiche emeralds are primarily found in the Muzo, Coscuez and Peñas Blancas mines of Colombia. The trapiche pattern is not an asterism, which is a six-rayed star pattern sometimes seen in cabochon-cut rubies, sapphires and other gemstones.